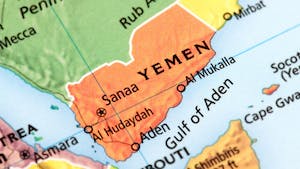 Both sides have traded blame for the latest uptick in violence in Yemen. The recent fighting along previously quiet frontlines in Nihm, Marib, and al-Jawf is reported ly the worst in three years. The Saudi-led coalition and Yemeni President Abdrabbuh Mansour Hadi’s exiled government have blamed Houthis for an unclaimed 18 January missile attack that killed more than 100 loyalist soldiers in Marib. The Houthis, however, have said that earlier coalition air and ground attacks triggered the recent upsurge in fighting.

Violence in Yemen had fallen to its lowest level in years after the attack on Saudi Aramco facilities in September 2019, which was claimed by the Houthis but widely attributed to Iran. In the days after the Aramco attack, the Houthis offered to halt cross-border attacks on Saudi Arabia, likely in the hope of preventing a wider regional conflict. This led to a series of confidence-building measures that sharply reduced fighting and facilitated ind irect peace talks between the two sides.

The recent resurgence in violence is consistent with the repeated failure of peace efforts in Yemen, which have typically failed to make progress or quickly been undone by fresh fighting. The UN has struggled to enforce the most substantive diplomatic achievement to date in Yemen, the 2018 Stockholm Agreement, which included a ceasefire covering the key port city of Hodeidah. The deal remains only partially implemented and is under pressure from continued skirmishes, underscoring the deep mistrust between the two sides.

Fighting in Yemen is likely to intensify in the weeks ahead. The parties lack effective de-escalation channels, as evidenced by their failure to contain the latest violence even as the talks that began in 2019 continue. In a major development, Houthi forces claimed tens of drone and rocket attacks against airports and oil facilities in southern Saudi Arabia on 31 January, the first such attacks since the truce took shape in September.

Violence in Yemen could spread further in the coming weeks. The Hadi government has warned that it is considering withdrawing from the Stockholm Agreement because of the latest fighting, which could trigger renewed competition for control of Hodeidah and areas along the Red Sea. The uncertainty over the deal highlights how the violence will threaten gains in other parts of the country.

The deteriorating situation in Yemen is also an indication that key parties may no longer seek to prevent a return to all-out conflict. The Houthis have made a series of military gain s in recent weeks, reducing their incentive to compromise.

Saudi Arabia faced renewed pressure to end the war in Yemen after the Aramco attacks, but now likely sees the Houthi’s main benefactor, Tehran, as weakened following the assassination of Iranian general Qassim Soleimani and recent unrest in Iran and the Middle East. The Hadi government will welcome renewed hostilities between Houthis and Riyadh, following fears it would be excluded from the peace process between the two sides.

Diplomatic efforts in Yemen are unlikely to bring about a sustained reduction in violence so long as they remain fragmented. Key parties to the conflict have been excluded from recent peace efforts and diplomacy has often focused on localised issues rather than the underlying drivers of violence itself. This narrow strategy, if continued, will leave peace efforts vulnerable to spoilers and unable to contain future spikes in violence.