Venezuela - Unrest to persist as Maduro tightens grip on power 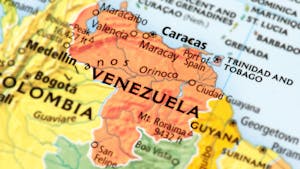 Venezuela – Unrest to persist as Maduro tightens grip on power

Since the beginning of April, Venezuela has witnessed sustained protests on a scale not witnessed since 2014, when 43 people died during anti-government unrest. The latest wave of protests was initially triggered by the Supreme Court’s attempts to assume the powers of the opposition-dominated National Assembly, a move which was revoked days after being introduced but served as a catalyst for protests over wider grievances including shortages of basic goods, triple-figure inflation and increasingly undemocratic practices by the ruling socialist PSUV. As in 2014, the protests have exhibited high levels of violence and repression, leading to the deaths of at least 38 people and the detention of hundreds more. Government attempts to quell the unrest – including the closure of protest routes and deployment of armed security forces – have failed to prevent protests, and the opposition MUD has vowed to continue to mobilise.

President Maduro has shown no sign of renouncing his position and maintains the support of key groups, making continued PSUV rule likely at least in coming months. Restrictions on political opponents and tight controls over key political and judicial institutions will continue to benefit the government. Maduro maintains the support of the military, which has been regularly deployed to crack down on the demonstrations. The claims of three Venezuelan lieutenants who deserted in late March, seeking asylum in Colombia, that a military uprising was possible indicates some discontent, but the highest-ranking military officials are likely to remain loyal to Maduro due to the significant major economic benefits that stem from close ties to government. Of the country’s 32 ministries, 11 are occupied by active or retired military personnel, and senior officials affiliated with the armed forces hold key influence over state oil company PDVSA and other state-run firms. Maduro allies also dominate key institutions including the Supreme Court and National Electoral Council (CNE), as exemplified by the court’s initial ruling to assume the power of the National Assembly last month and the CNE’s instrumental role in delaying the opposition’s attempts to hold a recall referendum on Maduro’s presidency throughout 2016.

Maduro is expected to continue to repress political opponents as the political crisis develops, likely stimulating further opposition unrest. In May, the president proposed to establish a constituent assembly with the ability to re-write the constitution and dissolve the National Assembly’s powers, effectively side-lining the legislature. The opposition has denounced the assembly, in which only 250 of 500 members will be elected and none will be from political parties, as a step towards a political coup, as well as a strategy for delaying the holding of regional elections, which were already postponed in 2016 amid low levels of government popularity. Maduro is also likely to maintain the ongoing state of economic emergency to circumvent the legislature, which was first introduced in January 2016 and extended for the sixth consecutive 60-day period in March. The PSUV may also continue to attempt to bar leading opposition figures from political involvement. In April, the leading opposition politician Miranda Henrique Capriles was barred from participating in politics for 15 years due to administrative irregularities in his role as governor of Miranda, while the opposition governor of Amazonas Liborio Guarulla was also suspended from public office for 15 years, for unspecified reasons, in May.

As the PSUV continues to tighten its grip on power, Venezuela will become increasingly isolated in the region. Caracas was suspended from regional economic group Mercosur for failing to conform to its democratic principles in December 2016 and the country began the formal process of withdrawing from the Organisation of American States (OAS) earlier in May. This distancing from regional groupings underscores the country’s increasingly marginalised position in the region, particularly following the ouster of leftist allied governments in Argentina and Brazil. Historically tense bilateral relations with the US will continue, and in May a group of US Senators drew up legislation to sanction individuals in the country and coordinate regional efforts in response to the protests. Venezuela is also likely to continue its precedent for adopting a hostile stance towards neighbouring Colombia as a diversionary tactic from domestic issues, including the closure of the countries’ shared border and recourse to inflammatory rhetoric. Bilateral tensions have already increased in recent months after some 70 Venezuelan soldiers made an incursion into the Colombian border province of Arauca in March. In addition, Bogota’s signature on two declarations by several countries in the region denouncing the use of force against protesters and calling on Caracas to hold early elections prompted angry statements from Maduro, who labelled Colombia a failed state and alleged the government would massacre demobilising rebels from the Revolutionary Armed Forces of Colombia (FARC).

The perilous state of the economy is not forecast to improve, ensuring ongoing difficulties facing the private sector in Venezuela will persist or could worsen. The IMF estimated inflation in the country was 475 percent last year, and could reach 2,000 percent in 2017, acting as a severe brake on consumer demand and requiring substantial salary increases for employees to keep pace with rising living costs. Companies will also continue to face difficulties in gaining access to dollars amid currency controls, complicating the repatriation of profits and access to imported raw materials. Although a more stable oil price could offer some respite, it is unlikely to have a notable effect on wider macroeconomic failings. Economic contraction in the country began in 2012, two years before the global decline in oil prices, and years of underinvestment in the oil industry have seen production decline by 16 percent in the past four years. More consumer and manufacturing companies may be forced to suspend operations in the face of shortages of materials, as Coca Cola did temporarily in May 2016 due to a lack of sugar.

The government could also revert to scapegoating foreign companies for its domestic problems and intensify expropriation of some targeted assets, as already witnessed under Maduro and previously by Hugo Chavez. In April, Maduro announced he had launched an official inquiry into Telefonica’s Movistar, claiming that the company was supporting a ‘coup’ by sending out mass text messages to customers promoting anti-government protests. In the same month, the government seized GM Motors’ plant in Valencia, prompting the company to announce it will withdraw from the country in a move that could incur losses of up to USD 100 mn. This comes after the government seized a factory owned by Kimberley-Clark in July 2016, after the firm said it was halting operations due to an inability to obtain raw materials.

Amid deteriorating economic conditions and the repression of the opposition, violent civil unrest will persist. The high levels of violence during the unrest, which has seen frequent clashes between demonstrators and security forces using armoured vehicles, rubber bullets and tear gas, has led several international companies, reportedly including Statoil and Repsol, to withdraw foreign staff from the country. Caracas has experienced the largest protests to date although demonstrations have been witnessed in other major cities, including Maracaibo and Valencia, and demonstrations will likely escalate should the government continue to arrest opposition leaders and procced with the introduction of the controversial constituent assembly.

Security forces in Caracas have sought to suppress opposition protests through the closure of roads and numerous metro stations, while protesters have frequently established blockades on the Francisco Fajardo highway, having a major impact on travel. Media personnel have been targeted by security forces as well as ‘colectivos’, pro-government groups who are often armed, and the Committee to Protect Journalists (CPJ) has warned that journalists have been detained, injured or had their equipment seized while covering the protests. Several foreign journalists have previously been barred from entry into the country and forced to return to point of origin upon arrival at airports on grounds of insufficient paperwork.