Thoughts around the long term seeding of disinformation and conspiracy, and the need for similar long term solutions 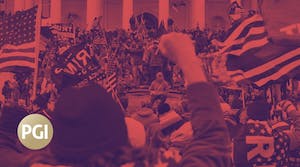 Imagine that for the past five years you’ve been trying to manifest the word ‘outwith’ into your organisation’s Microsoft Office dictionary, to no avail. When you say it in presentations, there’s always one person who narrows their eyes slightly, suspecting it isn’t technically a word. You put it in reports only to have a colleague edit it out. And yet religion, spirituality, superstition, and homeopathy all tell us that we can speak things into existence.

Have you heard of the Urdu (and Hindi) term ‘Kali Zubaan’? It’s the idea that if you say something negative and it comes true then you have a ‘black tongue’ and you spoke it negatively into existence. When this is unintentional, it’s Kali Zubaan. When this is intentional, and happens at scale, then it becomes something different.

One of the highlights of this job is coining our own terms for behaviours or patterns that fall outwith those we’ve seen before. Stochastic terrorism is the idea that if you demonise a target sufficiently over time, then the likelihood of a terrorist attack from that group increases. Stochastic disinformation is what we’re going to call the idea of speaking conspiracy into existence at scale.

As the votes were being counted in the US 2020 presidential election, a Tea Party activist named Amy Kremer created a Facebook group named ‘Stop the Steal’. The group was reportedly one of the fastest growing in Facebook history, and was a hotbed of outright disinformation and conspiracy; alleging that the election had been stolen by everyone from the Clintons to George Soros to Cthulhu. The movement appeared entirely organic, a massive popular response to perceived election fraud. Yet the movement was designed to appear entirely organic. Roger Stone created it in 2016 to attack Hillary Clinton ahead of Trump’s victory, it re-emerged around the 2018 midterms, before exploding around November 2020, and contributing to much of the events around the 6 January 2021 storming of the US Capitol. And all the while in between the overlapping Roger Stone – the Steve Bannon roadshow seeded narratives of disinformation around a stolen election across right wing television and radio. They spoke allegations of flawed Dominion voting systems, of foreign influence, of deep state interventions, in the hope that they would come into existence.

The reality is that, of course, they did not. But the problem for wider society, is that a fairly sizeable chunk of people did. Some of that sizeable chunk mobilised on 6 January, some supported the various iterations of ‘Freedom Convoy’ attempting to blockade Ottawa or DC, and almost all are still active in various conspiracy-friendly spaces online, ever more entrenched in their perspective by repeated stochastic disinformation emanating from the right wing ecosystem—spearheaded as ever by Fox News. The battlelines for 2024 will already have been drawn, and we’ll get a taster of what’s to come in a few months’ time during the midterms.

Majorie Taylor Greene is already trying to speak White Christian Nationalism into existence, Fox is focused on demonising members of the LGBTQ+ community, and Michael Flynn and Roger Stone are literally on a  conspiracy tour of the US to promote QAnon and whip up support for an uprising should the Midterms go badly for the GOP. Long term stochastic disinformation is here to stay, until we devise a long term, forward looking solution to countering its effectiveness.