The security threat in Hong Kong 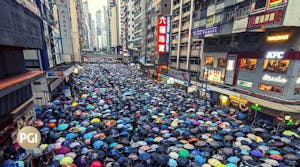 The security threat in Hong Kong

A year on from the imposition of a sweeping national security law, Beijing has effectively curtailed political freedoms throughout Hong Kong, cementing its control over the territory. The changes brought about by the law – mass arrests of pro-democracy activists, sustained attacks on press freedom, significant restrictions on public assembly and political participation – have largely eradicated the ‘one-country, two-systems’ dictum that divided the territory from the mainland since 1997.

The crackdown has largely lowered the threat of political violence and unrest. Since January, Chinese authorities have arrested over 50 pro-democracy campaigners, forced 180,000 civil servants to sign a loyalty pledge, barred opposition law-makers from standing in the local legislature, and shut down a popular independent newspaper, Apple Daily. These measures, combined with bans on annual demonstrations, like the commemoration of the Tiananmen Square Massacre, have had a chilling effect on Hong Kong’s once vibrant protest culture.

While polling suggests widespread antipathy towards the law and Beijing’s interference, few Hong Kongers appear willing to take to the streets to voice their displeasure. With livelihoods on the line and the threat of arrest and long jail terms, it appears likely that the majority will acquiesce to the government’s more restrictive limits.

The threat of small-scale terrorist attacks remains low. While individuals and small groups of anti-government demonstrators continue to take to the streets, invasive state surveillance – both online and offline – is likely to diminish the ability of radicalised individuals to conduct coordinated assaults. There remains a limited threat of individuals carrying out knife attacks on police officers or symbols of the Chinese state. However, heavily armed security forces are likely to suppress attackers quickly.

Hong Kong’s renowned international business sector is also likely to suffer from the territory’s loss of autonomy. While foreign firms have largely remained – either voicing support for or keeping notably silent during the introduction of the national security law – the probability of being caught in a diplomatic spat between Beijing and their home nations has grown.

The US has imposed sanctions on Chinese government officials for eroding the territory’s political freedoms. Beijing has introduced counter-legislation forbidding firms from acquiescing to ‘unjust’ foreign sanctions. These tit-for-tat measures are likely to impose costs on the ease of doing business in the city. China is also likely to exert pressure on employers to fire or transfer foreign employees who voice criticism of the government or transgress in small ways.

US and European firms whose governments have taken confrontational stances with Beijing over Hong Kong are increasingly likely to face boycott campaigns, protests, or online harassment by government supporters. For example, the Chinese government has encouraged boycotts and online campaigns against retailers including Nike and H&M, after both firms made remarks on human rights abuses in Xinjiang in recent weeks. Given this pattern of behaviour, it seems probable that firms, particularly consumer-facing ones, based in the city face similar risks.