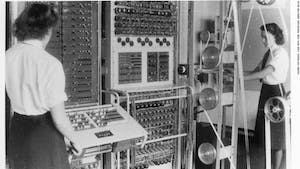 Some of you may be familiar with Cryptanalyst Joan Clarke – she was portrayed by Keira Knightley in the recent film, ‘The Imitation Game’ about Alan Turing and the Bletchley Park code breakers.

Joan Elizabeth Lowther Clarke was born a clergyman’s daughter in West Norwood, London in 1917. By all accounts, Clarke was a studious and clever child, and developed a lifelong passion for chess and number games. As a young woman, she attended Dulwich High School for girls, where she excelled and won a scholarship to Newnham College, Cambridge.

At Cambridge, Clarke continued to excel and she gained a double first in mathematics in 1939. Unfortunately for Clarke, Cambridge was not particularly progressive in the 1930s and she was prevented from receiving a full degree until 1948. However, her abilities did not go unnoticed and she was recruited into the Government Code and Cypher School (GCCS) by her former academic supervisor Gordon Welchman.

Initially Clarke, like many of the women who joined GCCS, was assigned to the pool of administrative and clerical workers known as ‘the girls’ in Hut 8. Clarke was quickly promoted to Linguist Grade—a promotion engineered to earn her extra money and acknowledge her workload and contribution to the team. She would later state that she enjoyed answering questionnaires with ‘Grade: Linguist, Languages: None’.

In Hut 8, Clarke was quickly promoted to her own table and joined a team which included Alan Turing, Tony Kendrick and Peter Twin. This group were assigned to breaking the complex Naval Enigma code designed to encrypt German Naval transmissions. The Naval Enigma code was significantly more complex than that used by the German Army or Luftwaffe; there were two extra wheels added (from 3 to 5), giving a total of 336 possible wheel orders, in addition to a different indicator system – instead of transmitting the indicators directly they were super enciphered using bigram tables.

The need for breaking this code was growing more and more urgent by the day. Britain was only days away from running out of food and German U-Boats were patrolling the Atlantic,  targeting Merchant Navy vessels transporting provisions from North America. Cracking the Naval Enigma code was of the highest priority.

In May 1940, the codebreakers got a breakthrough when a German patrol boat was captured off the Norwegian Coast. This meant that the plaintext and the Enigma cyphertext could be matched. Back at Bletchley Park, Clarke and the Hut 8 team were tasked with using a new key-finding aid called the Bombe against the recovered information. This resulted in the team being able to crack 6 days’ worth of traffic.

Although successful in part, the Bombe technique was time consuming and difficult, relying on the capturing of German Enigma rotors’ and plaintext data. By 1941, there were fewer Bombes available and new techniques were needed.

As a solution, Turing invented a new codebreaking technique called Banburismus. The aim of the Banburist technique was to identify the right and middle wheel of the five available, thus reducing the possible wheel orders from 336 to as little as 20.

Joan Clarke was the lone female Banburist, along with 8 male colleagues. Head of Hut 8, Hugh Alexander, described Joan Clarke as “one of the best Banburists in the section”.

To speed up their efforts the Banburists developed their own methodologies. Clarke developed her own method to speed up the technique and she was surprised to learn that unbeknownst to her what she had actually done was to replicate a method developed by World War One Cryptographer Dilly Knox.

The Banburists had another breakthrough in 1941 when German trawlers were captured with cipher equipment and codes, giving the team the Bigram tables needed to accomplish their task. The team continued tirelessly and successfully for two years using the Banburismus technique and in 1943, ultra-fast Bombes became available, increasing the team’s success rate exponentially.  In nine months, the team were able to reduce the amount of shipping destroyed German U-Boat ‘Wolf Packs’ each month, from 282,000 tons to 62,000 tons, saving countless number of lives in the process and ensuring that Britain was able to resupply vital food and aid.

Clarke continued her codebreaking efforts throughout the war and in 1944 she became Deputy Head of Hut 8, an astounding personal accomplishment in the male dominated environment of Bletchley Park, and a testament to the esteem she was held in.

An MBE and transferring to GCHQ

In 1947, Clarke was awarded an MBE for her codebreaking expertise during the war and she transferred to the newly formed GCHQ where she remained, until retiring in 1977. Due to the Official Secrets Act, Clarke and her work was to remain unrecognised for many years. Even now, the extent of Clarke’s work and contribution remain unknown. What is certain, however, is that without her and her contributions to the war effort many more lives would have been lost and it is not impossible to imagine that the duration of the war would have been greatly extended.

Joan Clarke is a true wartime hero and pioneer in the development of Cryptography and Cryptoanalysis. Hopefully now with the passing of time her story and contributions will be better known and inspire more young women into the world of technology and mathematics.