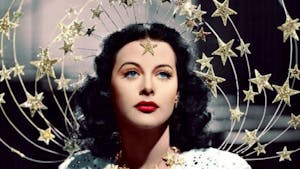 Hedwig (Hedy) Eva Maria Lamarr was born in Vienna Austria in 1914 to an affluent middle class family. By the 1920s she was a trained actor and spent time working in Berlin, going on to star in Gustav Machat’s controversial and racy film, Ecstasy, which pushed her into the limelight in 1933.

However, acting wasn’t Hedy’s only interest. It was during her marriage to Austrian arms merchant Friedrich Mandl that Lamarr attended many of her husband’s military business meetings and conferences and developed an interest in applied science and technology. This foundation and understanding of military technology and her interest in applied sciences would go on to serve her well.

In 1938, Lamarr’s life changed dramatically and she moved to Hollywood. She was introduced to the world by talent scout Louis B Mayer as the “most beautiful woman in the world” and went onto make countless films during the 1940s, acting alongside some of the most famous actors of the day including Clark Gable and Spencer Tracy.

At the outbreak of the Second World War, Lamarr felt it was her civic duty to join the fight against Nazism—she was specifically concerned with what she could do to prevent Nazi submarines from torpedoing passenger ships. While she was initially drafted into the war effort to sell war bonds and help to raise funds, she was still concerned with the problem of torpedoes and was determined to do something about it.

So, like all good inventors, Lamarr drafted in her neighbour—avant-garde composer George Antheil—and dedicated a room in her apartment to developing a frequency-hopping system which would stop the signals of radio-controlled torpedoes being jammed by the enemy. Thus allowing the US Navy to successfully torpedo Nazi submarines who were targeting Allied passenger ships.

Lamarr and Antheil achieved this using a piano roll to unpredictably change the signal between a control centre and the torpedo at short bursts within a range of 88 frequencies in the radio-frequency spectrum (88 is the number of keys on a piano). The specific code for the sequence of frequencies would be held by both the controlling ship and within the torpedo itself. This would make it incredibly difficult for the enemy to scan all of the 88 frequencies and jam the signal.

Although this was pioneering and innovative work, Lamarr and Antheil’s idea was not adopted by the US Navy until 1962. However, their work was the foundation of modern spread-spectrum communication technology, which is the basis of GPS, Wi-Fi and Bluetooth.

After many years of little recognition, in 2014 Lamarr and Antheil were inducted into the National Inventors Hall of Fame.

Hedy Lamarr is one of the pioneers of her age; a woman who saw a problem and resolved to do something about it. Alongside developing a frequency-hopping system, Lamarr also developed a carbonated soft drink and improved traffic lights!