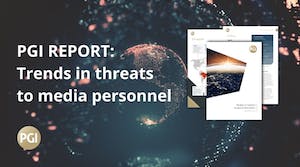 Throughout 2020, we saw a substantial increase in the number of reported attacks on journalists and media personnel, compared to 2019. As anti-media narratives grow more dominant and civil unrest continues to foment across the globe, this trend is unlikely to subside in the coming year.

There have already been significant instances of violence, repression of media in 2021. Prominent examples include Azerbaijani authorities sentencing a journalist to 16 years in prison, security forces in Belarus searching journalists’ homes and offices nationwide, and Chinese officials arresting an Australian journalist on spying charges.

We are likely to see more instances of violence, harassment against journalists. Increasing levels of violence by security forces and new laws inhibiting freedom of speech further worsen the operating environment for media personnel worldwide.

The PGI Media Threat Report 2021 assesses the risk media personnel are facing worldwide, and analyses which geographies are likely to become more dangerous for journalists in the coming year.

Contact us for a free copy of the report

To develop this report, PGI’s expert geopolitical risk analysts examined the trends, triggers, and outlook for press freedom globally. Having trained in advanced intelligence exploitation and research techniques, our team was able to use their specialist knowledge of geopolitics, various sectors, and regions to identify potential security risks to media personnel.

All of this expertise helped us provide the crucial context around global activity, from elections to protests, making it possible to turn nuance and insight into actionable intelligence.

While many countries will remain challenging environments for media teams, this report examines the factors affecting threats to journalists in the following areas:

Contact us for a free copy of the report

PGI deliver a range of risk analysis services to media clients, and other organisations with global operations, to enable them to navigate the complexities of the modern threat landscape. Please feel free to contact us with any thoughts or questions you have on the report.

If you’d like to explore some of our offerings, please contact riskanalysis@pgitl.com to arrange a free trial of our global risk platform, the PGI Risk Portal.