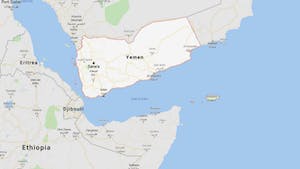 Separatists have repeatedly clashed with Hadi’s government since 2017, reflecting longstanding divisions between the two allies of convenience. In 2015, Hadi, who favours a unified Yemen, was forced into an alliance with pro-independence militias in southern Yemen after much of the country’s security forces collapsed. However, their partnership has increasingly fragmented as the conflict has dragged on and their interests have diverged.

Politics within the STC, and external factors, especially the UAE’s decision to pull out of Yemen, are among the likely triggers of the latest violence.

The scale and intensity of recent fighting, as well as the UAE’s intervention on behalf of STC, suggests a peaceful resolution is unlikely. The spread of fighting across southern Yemen, the high number of casualties in the Aden clashes, and the ongoing build-up of forces on both sides, distinguish the latest bout of violence from earlier skirmishes between the two sides.

Saudi orchestrated talks to resolve the conflict appear to have stalled, meaning further violence is likely. Reuters reported the talks have reached a deadlock over the separatists demands for control of the vice-presidency and two key ministries. Yemen’s government has said the STC&rsqu o;s demands would mean legitimising an insurrection if accepted.

Opposing interests of key players also further complicate events. Saudi Arabia is likely eager to avoid a new civil war in southern Yemen or permanent rupture with the UAE, but the STC is unlikely to hand over captured territory or reverse its expansionist agenda. The group retains Emirati backing and southern separatists have waged a decades long struggle for independence. Although the STC continues to recognise the Hadi government, it aims to eventually restore the formerly independent state in southern Yemen, complicating any negotiations.

As reflected in its recent demands, the STC is manoeuvring to ensure its influence and interest s are protected in any post-conflict settlement. Separatists have also reportedly held talks with Houthi forces, underscoring the potential for Yemen to fragment into multiple spheres of influence. For its part, the Hadi government has shown no signs of backing down and has likely been emboldened by recent support from Saudi Arabia and its recent battlefield successes against STC militias in Shabwa and Abyan.

Houthis to benefit from instability in southern Yeme

The Houthis are likely to benefit from the collapse of the anti-Houthi alliance. Saudi Arabia has called on Hadi and the STC to cease fighting and focus on the Iran-aligned rebels, but the war against the Houthis has already stalled and settled into a military stalemate. In 2019, Houthi rebels have intensified their cross-border atta cks on Saudi Arabia, demonstrating the lack of progress in the four-year old war.

The Houthis could attempt to exploit the recent fighting by targeting the Southern Giants Brigade, a UAE-backed force in western Yemen near the strategic Bab el-Mandeb Strait. Pro-Hadi government forces have been redeployed from fighting against the Houthis to southern Yemen, which could leave them more exposed to Houthi attacks.

The Houthis may also benefit if the fighting in southern Yemen increases pressure on Saudi Arabia to end the war in Yemen. The UAE withdrawal leaves Saudi Arabia isolated in Yemen and in early September, the US, Saudi Arabia’s most important ally, confirmed it had begun direct talks with the Houthis to end the conflict.

Al-Qaeda, IS also likely to gain

Jihadist groups are also likely to exploit the recent instability in southern Yemen. In August, the Islamic State (IS) group claimed at least five attacks in Aden, its first in more than 15 months. The recent fighting has provided an incentive for the group, which has largely focused on al-Bayda in southern Yemen, to resume activity in Aden.

Al-Qaeda in the Arabian Peninsula (AQAP), Yemen’s most powerful jihadist group, is also poised to benefit from recent instability in southern Yemen. Since 2016, AQAP has been weakened by a UAE-led, US-backed counter-terrorism campaign but these gains are at risk if the current divisions result in a security vacuum that the group can exploit.