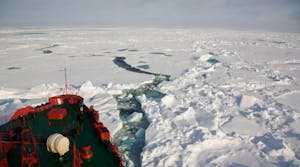 As climate change makes the Arctic increasingly accessible, more countries are paying attention to its potential value as a transport corridor. Icebreakers assist the navigation of vessels through Arctic shipping routes and to frozen ports.

Russia has invested heavily in its Arctic fleet, operating the largest fleet of icebreakers worldwide. In 2019, state-owned nuclear energy company Rosatom announced the introduction of armed nuclear-powered icebreaker vessels to its fleet. The vessels host a new missile defence system and anti-ship hypersonic missiles. The ability to deploy such weapon systems on long-range icebreakers is unmatched by other states.

Russian interest in the Arctic

The Arctic represents a key economic opportunity for Russia. The region holds 13 percent of the world’s known untapped oil, 60 percent of which lies within Russian territory. Climate change has made these reserves increasingly accessible for extraction, offering a valuable means of diversifying Russia’s oil supply. Similarly, the region contains about 20 percent of the world’s remaining underground natural gas reserves, which Moscow has begun to extract.

The Northern Sea Route, the shipping route stretching from Vladivostok to Europe, is connected to China’s Belt and Road infrastructure scheme. Moscow is the security broker for Chinese commercial ventures in Central Asia and Africa. Russian investment in armed icebreakers continues this trend, strengthening the Sino-Russian partnership. The route boosts Chinese shipping by cutting the journey from Shanghai to Europe by 4,600 km and 10 days, compared to routes through the Suez Canal. Beijing has shown increasing interest in the region and published its own Arctic strategy in 2018 in which it declared itself a ‘near-Arctic state’ and outlined a ‘Polar Silk Road.’

The Arctic also has symbolic value to Russia. In 2015, the deputy prime minister at the time described the Arctic as ‘Russia’s Mecca’. Non-militarised nuclear vessels are publicised as pioneering achievements by Russian state media, as they are unmatched in number and technology by Western nations.

Although assertive in several areas of international relations, Russia’s cooperation and non-aggression in the Arctic suggests the prospect of regional conflict is low in the short term. Moscow has obeyed the demarcation of undersea territory in the Arctic as ruled by the UN Convention of the Law on the Sea and diplomatically resolved its territorial dispute with Norway in 2010.

Moscow has also cooperated with the region’s multilateral organisations, such as the Arctic Council and the Barents Euro-Arctic Council. In 2010, for instance, Russia resolved a territorial dispute with Norway in the Barents Sea through diplomacy.

Although Russian rhetoric and public displays around the Arctic have at times been incendiary, Russia’s cooperative actions suggest that its policy is aimed at a domestic audience. In 2007 a Russian expedition planted a Russian flag on the Arctic seabed, with the leader claiming that ‘the Arctic has always been Russian and will always be Russian.’

The investment in the nuclear-powered icebreakers is a further example of domestic focus. Their unmatched capabilities likely act as a source of national pride to a domestic audience. The Russian state has sought to reinforce this image by naming the vessels after prominent Soviet explorers, such as Ivan Papanin, evoking national memories of Russia as a great power.

Russia likely regards NATO as the primary threat to its Arctic interests. Though no definitive plans exist to expand NATO’s presence in the Arctic, Russian concerns remain over the alliance threatening Arctic access. NATO may seek to move more vessels into the Arctic if it becomes a major route for international trade.

During the present stability, the investment in icebreakers armed with ship-to-ship missiles gives Russia additional maritime capability while securing Russian interests. As these vessels will be in service for at least 25 years, Moscow may be betting on long-term uncertainty over Arctic security.

A future increase in regional NATO presence could prompt a change from a cooperative strategy. This may occur if member states invest in the region for trade or feel threatened by Russian or Chinese presence.