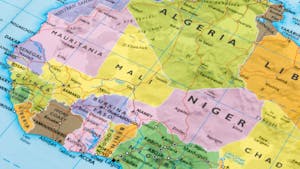 On 9 January, suspected ISGS militants killed 89 Nigerien soldiers in an attack on the Chinagodrar military base near the border with Mali. The attack, the deadliest to target the military in Niger’s history, came just one month after ISGS killed 71 soldiers at the Inates base in the country’s Tillaberi region.

Both attacks were facilitated by the withdrawal of Malian soldiers from border positions following an ISGS attack on the Indelimane military base in Mali’s Menaka region in November 2019. Malian forces retreated from advanced border positions in three locations, leaving Nigerien military bases considerably more exposed to cross-border attacks from Malian-based ISGS militants.

ISGS’s operations in Niger are part of an ongoing trend of Islamist militant groups targeting geographically isolated military bases in the Sahel. This trend started in September 2019 when JNIM attacked two military bases in central Mali near the border with Burkina Faso. Since then, ISGS have followed suit by attacking at least four bases in Mali and Niger, killing over 200 soldiers in total.

The Nigerien army withdrew from three advanced border positions following the Chinagodrar attack, a move that will effectively hand control of the Mali-Niger border region to ISGS. Together with the withdrawals on the Malian side of the border, this strategy will allow ISGS to expand recruitment efforts and attack previously inaccessible targets further south and north of border areas.

ISGS is likely to step up assassinations of community leaders in the border region in an effort to increase its authority in the area. ISGS killed around 15 pro-government community leaders in Tillaberi region in 2019, with five killed in the space of just three days in November. The killing of leaders will undermine local intelligence-sharing capabilities and the state’s authority in the region.

ISGS will also seek to further its existing alliances with disaffected factions within the Tuareg, Daosahak and Peul ethnic groups in order to control local populations. ISGS has set up networks of informants in the border region, enabling it to punish local communities who co-operate with security forces and therefore reduce the army’s capabilities in the area.

Additional ISGS attacks on military bases are likely in the near term amid weakened security capabilities in the Mali-Niger border region. The Chinagodrar attack was the fourth major ISGS operation targeting military forces in Niger within the space of just six weeks, and the group is likely to capitalise on its growing momentum by attacking targets further south and north of the border.

ISGS’s displacement of al-Qaeda affiliate JNIM as the most active militant group in the Sahel will likely prompt a substantial response from JNIM. JNIM killed 20 soldiers in an attack on a military base in Segou region, central Mali, near the border with Mauritania on 26 January, and further attacks targeting military bases in Burkina Faso and Mali are to be expected in the coming months. A JNIM attack targeting Western nationals or assets in West African countries such as Côte d’Ivoire, Ghana and Senegal also remains possible in the near term given the positive impact it would have on the group’s perceived strength.

The Nigerien army is likely to launch counter-terrorism operations in the coming months in an attempt to reassert control over the border region. Given that ISGS is able to move between the porous border virtually uncontested at present, military operations will only be effective if they are conducted in co-ordination with Malian and Barkhane forces on the Malian side of the border. However, given the remote nature of the terrain, joint operations on this scale do not appear feasible in the near term.

Nigerien and Malian forces are highly unlikely to regain control over the border region in the short-to-medium term. Local forces have suffered a series of major defeats that have significantly damaged the army’s morale. The Malian government’s recently announced plan to recruit 10,000 new soldiers in the coming months seems unachievable, and it is also unclear how Mali will pay for the increased costs or train the new recruits to an adequate standard. At present, amid weak security forces’ capabilities, containment of Islamist militancy in the Mali-Niger border region remains the only realistic strategy available to armed forces.

Promises of increased security co-operation between France and G5 Sahel countries following the Pau summit in January are also unlikely to lead to an improvement in the security situation, at least in the near term. French forces, who provide vital aerial, tactical and on-the-ground support to local forces, remain severely overstretched in Mali. France has announced plans to reinforce its Barkhane contingent with an additional 600 troops, most of whom will be stationed in the tri-border region with Burkina Faso, Mali and Niger. However, it remains unlikely that the reinforcements will prove sufficient to halt escalating militancy in the border region given the difficulties of the terrain, weak local counter-terrorism capabilities and the growing strength of ISGS.