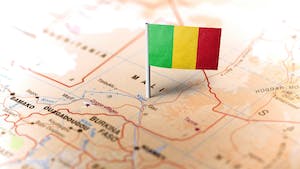 On 2 March, leaders of several Mali-based terrorist factions linked to al-Qaeda released a video statement announcing the creation of a new organisation via the merging of their groups. In the video statement, the leader Ansar al-Dine, Iyad Ag Ghaly, states that the new faction is to be named Jama’at Nusrat al-Islam wal-Muslimin (JNIM; ‘The Support Group for Islam and the Muslims’), and would bring his own group into a single formal entity with the Greater Sahara Brigade, al-Mourabitoun, and the Macina Brigade. The statement was released via a Telegram account titled al-Zaleqa Media Production, which is to be the official propaganda outlet for the new organisation.

Appearing alongside Ag Ghaly in the video are the senior militant leaders Yahya Abu al-Hamam (emir of the Greater Sahara Brigades), Ahmadou Kouffa (emir of the Macina Brigades), al-Hasan al-Ansari (deputy emir of al-Mourabitoun), and Abu Abderrahman al-Sinhaji (a senior cleric in the Greater Sahara Brigades). It appears that these figures are to be the operational commanders of the new group, and Ag Ghaly the regional emir. As Ag Ghaly specifies in his statement, the organisation will remain loyal to the higher leadership of al-Qaeda in the Islamic Maghreb (AQIM) leader Abdel Malik Droukdel, a.k.a. Abu Musab Abdel Wudud, as well as al-Qaeda Central leader Ayman al-Zawahiri and Taliban leader Mullah Haibatullah. As the Long War Journal has highlighted, this pyramidal system of emirs (or ‘commanders’) is characteristic of how al-Qaeda’s international organisation is structured.

Interestingly, the veteran Algerian jihadist Mokhtar Belmokhtar does not feature in the statement, despite being the nominal leader of al-Mourabitoun. This is a potential indication that Belmokhtar is either severely incapacitated in his hideout in Libya (as has been rumoured) or perhaps has already died. Although al-Mourabitoun named Belmokhtar as its official emir in August 2015, the group has released no concrete proof that he is still alive following two unconfirmed reports of him being killed in airstrikes in Libya since 2015.

The formation of JNIM is the latest development in a trend going back to late 2015, which has seen al-Qaeda-linked groups in Mali becoming more cohesive and coordinated. For several years previously, the group’s senior figures and associates had been fairly disparate and in some cases conflicted, with leaders such as Belmoktar splitting from the leadership of Abdel Malik Droukdel and forming separate groups. Since 2015, however, these splintered factions have been steadily regrouping. Belmokhtar’s group officially rejoined AQIM in December 2015, and operational coordination in Mali between AQIM and Ansar al-Dine increased throughout 2016.

The formalisation of this new alliance reflects a growing maturity and confidence among al-Qaeda’s regional affiliates, as their factions consolidate their influence within Mali. Since 2015, AQIM has been increasingly pushed out of its historic homeland of Algeria, as the government has sought to boost securitisation following Belmokhtar’s attack against the Tiguentourine gas complex in January 2013. Mali, meanwhile, continues to suffer from a major power vacuum, political instability in the northwest, as well as numerous ethnic-political divisions, and has provided an ideal base for terrorist factions. This has allowed al-Qaeda affiliates a large amount of room to manoeuvre and strategically develop, which resulted in a large increase in the number and complexity of attacks in Mali last year compared with 2015. With the formation of JNIM, a heightened level of terrorist activity in Mali is expected to continue in 2017, possibly involving more frequent or complex attacks on Malian and UN security positions.

The merger could also bolster AQIM’s long-term presence in Mali by widening its recruitment capability. Al-Qaeda’s strategy across multiple regions involves attempts to integrate into local communities and curry favour with regional populations, in order that the group’s affiliates can become accepted as legitimate political actors. This is also likely to continue to be a key focus of JNIM, with al-Qaeda now having expanded its formal network in Mali. The name chosen by the new group reflects these efforts toward local outreach, by attempting to make the organisation appear broadly appealing to Muslim populations in the region. The name is similar to that originally given to al-Qaeda’s affiliate in Syria (Jabhat al-Nusra, or ‘the Support Front’), and is reminiscent of language typically used by al-Qaeda branches in propaganda releases, which place emphasis on the protection of Islam and Muslims from foreign imperialism and secularism.

Over the past decade, al-Qaeda’s regional activists have often sought to distance themselves from the movement’s global jihadist project, with local community engagement efforts being pursued through regionally connected front groups without an explicit link to the central organisation. Ansar al-Dine and the Macina Brigade were examples of such groups, and allowed al-Qaeda to cultivate local alliances with ethnic Fulanis in Mali’s central and southern regions. One reason that al-Qaeda chose to do this, as highlighted in correspondence sent between its international leaders, was to shield the group from large-scale counter-terrorism operations, such as those carried out by the US and its local partners, while becoming progressively more active in particular regions. The fact that AQIM-linked groups have now decided to form a single organisation in Mali, with an explicit and public pledge of allegiance to Droukdel and al-Zawahiri, is likely to be a further reflection of the increased level of confidence which the groups enjoy in the region as a result of Mali’s long-term security vacuum.

The low prospects for an improvement in the security environment in Mali – especially in large, scarcely-policed areas of the north – means that JNIM will continue to base operations out of the country and present a notable threat to regional security. Though there is a possibility that JNIM may attempt to launch a cross-border incursion into Algeria – as AQIM did in March 2016, when it fired several long-range rockets into the Krechba gas facility in Ghardaia province – but the Algerian government’s higher level of border security is likely to encourage the group to remain primarily focused on less securitised regions inside Mali, and perhaps other less secure neighbouring states including Libya, Burkina Faso, and Niger. The impact of the unification of the attack capability of these armed groups is as of yet unclear, though it could facilitate improved coordination in other activities including trafficking, from which AQIM continues to generate significant revenue. The sustainability of the alliance in the face of personality or strategic differences may be tested over the coming year, but the development presents a potentially heightened security challenge for Bamako as well as governments across the Sahel seeking to contain the terrorist threat.