Iran - Rouhani faces rising challenges ahead of May election 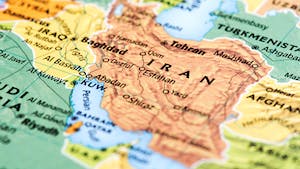 Iran – Rouhani faces rising challenges ahead of May election

Supreme Leader Ali Khamenei has publicly criticised Rouhani, saying on 20 March that the government had failed to make sufficient progress in tackling inflation and unemployment. He also repeated his earlier criticism of Rouhani for failing to promote Iran’s so-called ‘Resistance Economy.’ Rouhani’s popularity has been perceived as a potential threat to Khamenei and the two have notable ideological differences. While Rouhani’s moderate camp favours greater liberalisation to repair the economy, the conservative or ‘principlist’ allies of Khamenei support economic self-reliance to mitigate the threat from external shocks such as sanctions.

Khamenei’s public criticism of Rouhani has emboldened his conservative rivals to follow suit. In recent weeks, Rostam Ghassemi, who served as oil minister under former president Mahmoud Ahmadinejad, and Alireza Zakani, a former MP, have condemned Rouhani on the economy. Zakani was one of several candidates nominated in early April to represent the conservative Islamic Revolution Forces Popular Front (Jamna) coalition in the election. The umbrella group hopes to agree on a single candidate at a later date. Other notable nominees include presumed frontrunner and hardline cleric Ebrahim Raisi, and Tehran Mayor Mohammad Bagher Ghalibaf, who came second to Rouhani in 2013.

Rouhani has also been criticised on foreign policy, and in early March, former Iranian Revolutionary Guard Corps (IRGC) Commander Mohsen Rezai – who lost to Rouhani in the 2013 election – and IRGC Air Force Commander Brigadier General Amir Ali Hajizadeh, both appeared to portray the president as weak on US policy. Hardliners have been emboldened by Khamenei’s criticism as well as the election of US President Donald Trump, whose tough stance on Tehran has been exploited by critics as evidence that Iran made too many concessions during the nuclear talks.

Although accurate polling remains problematic in Iran, recent surveys have consistently indicated Rouhani remains vulnerable on the economy and the landmark 2015 nuclear deal, or Joint Comprehensive Program of Action (JPCOA). The nuclear deal is inextricably linked to Rouhani, and, according to a poll released in January by the Centre for International and Security Studies at Maryland (CISSM), nearly 73 percent of Iranians agreed that economic conditions had failed to improve after the deal and 51 percent felt the situation was deteriorating. A survey released by Iran Poll in April found similar levels of discontent over the economy and the nuclear deal, with more than 40 percent saying Rouhani was “somewhat likely” to lose the election and a further 14 percent suggesting his defeat was “very likely.”

However, despite increased public scrutiny and criticism, historical precedent and disunity among Rouhani’s rivals suggests that it is still likely he will secure a second term. Since Khamenei’s presidency in 1981, all Iranian presidents have successfully secured two terms in office, and notwithstanding recent pressures, Rouhani appears to remain among the most popular figures in the country. In the 2013 presidential election, conservatives failed to unite around a single candidate, and a similar situation may again bolster Rouhani’s electoral prospects. Jamna has struggled to agree on nominees and a rival principlist faction, the Steadfastness Front, has reiterated its opposition to the conservative umbrella group. In a major challenge to the Supreme Leader, former president Mahmoud Ahmadinejad registered for the race on 12 April after Khamenei had explicitly advised him not to do so months earlier. Ahmadinejad’s entrance could be a tactical move to pressure the Guardian Council, which must approve all candidates, from disqualifying his former vice president Hamid Baghaei, who is reportedly under investigation over corruption. Barring both Baghaei and Ahmadinejad could subject authorities to criticism that they are marginalising their supporters, and separately serves as a further indication of disunity within the conservative camp.

The brief campaign season and lack of clarity around presidential challengers only increases the level of uncertainty around the vote. More than 1,600 people have registered to run in the 19 May election and the supervisory Guardian Council is expected to publish a final list of approved candidates on 24 April. Campaigning will commence three days later and continue until 17 May. Symbolising the uncertainty, Rouhani’s first Vice President Eshaq Jahangiri has registered to run in the unlikely event that the incumbent himself is disqualified.

Investors challenges irrespective of the outcome

Rouhani’s failure to secure a second term would derail the president’s campaign to reduce the political and economic influence of the IRGC. Rouhani has sought to implement reforms, including modernising Iran’s financial and banking system, to attract more foreign investment and provide greater confidence to investors. Should he lose, the already powerful and conservative military and security establishment could see its influence grow, and Iran may embrace insular and protectionist policies designed to minimise its vulnerability to external events.

Even under the most likely scenario, in which Rouhani remains in office for another four years, investors will continue to face complex political and economic conditions. Conservatives in parliament, the security services, media and other powerful institutions will continue to challenge Rouhani amid long-standing factional competition for influence. Underscoring the consequences of this political manoeuvring, in March, Rouhani accused the judiciary of impeding efforts to attract investment, citing the arrest of an unnamed investor. The president will retain only limited powers to push back against efforts by the courts and security services to protect their own interests by discouraging investors, also evidenced by the repeated arrests of dual Iranian nationals in recent months.

Rouhani will also continue to face resistance to the implementation of necessary economic reforms. In June 2016, the Financial Action Task Force (FATF), an intergovernmental anti-money laundering body, agreed to suspend some restrictions on Iran while the country implemented reforms to address deficiencies in its financial and banking system that serve to deter Western financial institutions. Engagement with the FATF has however triggered heavy criticism from conservatives, including in parliament, who argue working with the body could damage national security and cut off Iranian entities, including those affiliated with the IRGC, from the financial system. The inclusion of IRGC-affiliated entities on a shortlist of Iranian businesses approved for partnerships with foreign oil companies is also indicative of the concessions Rouhani will be forced to make to other powerful factions that could ultimately weaken his administration’s outreach to investors.

Sanctions risk and hostile US relations

Uncertainty around sanctions and Iran’s foreign relations will remain a major challenge for the investment climate. The IMF noted in a February report that although Iran had made an “impressive” economic recovery in the past year, anxiety over the nuclear deal and the country’s foreign relations, especially with the US, had created “renewed uncertainty” that threatened the “anticipated recovery”. In November 2016 France’s Total became the first major Western investor in Iran with a USD 2 bn deal for the giant South Pars gas field. However, to avoid US sanctions and minimise exposure to Iran’s financial system, Total said it would use its own euro-denominated cash for the project and receive payment in the form of condensates that it would sell on international markets. Total also appointed a full-time official to monitor sanctions compliance and said that a final decision on the project was dependent on an extension of US waivers of sanctions on Iran. The renewal of the waivers is due to take place in mid-2017, though in April Secretary of State Rex Tillerson announced a planned review whether lifting sanctions on Iran was in US interests despite acknowledging Iran was complying with the nuclear deal.

The increasingly hostile international climate facing Iran since late 2016 is likely to impact the country’s investment prospects. The presidency of Donald Trump has the potential to result in a significant escalation of already heightened tensions between Iran and its rivals. Trump has previously stated his opposition to the nuclear deal and key advisors, including Defence Secretary James Mattis, have urged a tougher stance on Iran. It is unlikely Trump will unilaterally withdraw from the 2015 nuclear agreement JCPOA given the legal, diplomatic and political fallout that would follow. However, his administration could seriously undermine the nuclear deal by pressuring Western companies not to do business in Iran, withholding official compliance guidance around the enforcement of Iran-related sanctions, or creating uncertainty around sanctions waivers.

Washington could increase tensions further by imposing additional unilateral sanctions, as it did in February in response to a ballistic missile test. Both the administration and US Congress are considering designating the IRGC as a Foreign Terrorist Organisation, a provocative move that would increase the complexity of doing business in Iran given the organisation’s vast economic interests. Such a decision would likely elicit a hostile response from the IRGC or its proxies, including possibly Shi’a militias in Iraq who could threaten US soldiers in the country. Trump has also said his administration will step up cooperation with Israel and Saudi Arabia, Iran’s primary rivals in the region, including against Iran-backed Houthi rebels in Yemen.

There is also a growing threat of a direct confrontation between the US and Iran, or Iran-backed forces, in maritime flashpoints in Strait of Hormuz and Bab el-Mandeb strait. In January 2016, Iranian forces captured 10 US sailors, and it took the intervention of then US secretary of state John Kerry, and his Iranian counterpart Mohammad Javad Zarif – two diplomats who forged a working relationship during the nuclear talks – to secure their release hours later. However, the change in the US administration is likely to complicate diplomatic efforts to prevent or contain the escalation of any future crises in proxy battlefields such as Iraq or disputes over implementation of the nuclear deal.