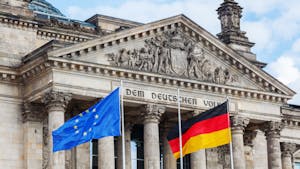 Merkel’s former coalition partners the Social Democrats (SPD), which performed badly in the September elections, initially refused any kind of coalition with the CDU/CSU conservative bloc. However, the SPD reversed its decision following an appeal from German President Frank-Walter Steinmeier on 24 November. Merkel has so far succeeded in averting another election by attempting exploratory coalition talks with the SPD.

The most likely outcome of the current political impasse is that Merkel’s CDU/CSU conservative bloc will reach a power-sharing agreement with the SPD, although there is no guarantee of a quick settlement. If the talks fail, Merkel’s CDU/CSU bloc would be forced to rule as a minority government – unprecedented in Germany’s post-war history. The likelihood of a fresh election is low, as SDP, CDU/CSU and President Steinmeier are opposed to holding one. However, the possibility cannot be entirely ruled out, and calls for another poll could emerge if all other negotiating options have been exhausted.

The inclusion of AfD as a coalition partner in government is unlikely, even in the event of a fresh round of elections, since no party has shown the willingness to partner with it. Nevertheless, AfD will continue to influence the political debate in Germany for the foreseeable future. Anti-immigration sentiment is likely to persist or even worsen amid concerns about national identity and Merkel’s immigration policies. Events outside Europe and largely beyond Berlin’s control – such as the fate of the peace process in Syria – could improve or worsen the situation.

The immediate ramifications of Germany’s political stalemate for the domestic regulatory environment are mild. CDU will continue to lead the government, preventing any radical regulatory changes. There could be some regulatory change if a future government included the Greens. But they demonstrated a willingness to compromise in November’s failed coalition talks – dropping a proposed ban on combustion engines, for example – and would probably not exercise much weight as a coalition partner.

The impasse could have a wider impact on the EU and could stall momentum behind French president Emmanuel Macron’s Eurozone reform programme. Macron has signalled since his election that a stable and strong Germany is essential to his reform agenda. The erosion of Germany’s traditional stabilising role within both the EU and the Eurozone could further undermine confidence in EU institutions and embolden Eurosceptics and nationalists across the bloc. Right-wing anti-EU sentiment has emerged in numerous European countries and has tended to dilute enthusiasm, even among centrist parties, for EU centralisation. The current crisis in Germany is part of a significant ideological challenge to deeper political integration in the EU.

Scenario A – Success of coalition talks

The success of the talks would see another grand coalition between CDU/CSU and SPD, as ruled from 2005-2009 and from 2013 up until the 2017 elections. SPD is reluctant to take this course of action, claiming that partnering with CDU/CSU has damaged its political credibility, as evidenced by its poor results in the September elections. Given scepticism within the SPD party membership, a grand coalition may only come about if Merkel’s conservative bloc can reach some kind of compromise on key SPD policies.

Talks between SPD and CDU/CSU are not entirely under the control of the leadership of each party. SPD will vote on whether the party can move ahead with official negotiations with CDU/CSU at its national conference in Berlin on 7-9 December. Polls suggest that a majority of party members do not favour a grand coalition. SPD’s youth organisation, Jusos, is also opposed to it.

CDU’s Bavarian sister party, CSU, has nominated Markus Soeder, a strong critic of Merkel’s refugee policies, as its candidate for state premier in 2018 Bavarian elections. CSU’s shift to the right on migration issues could weaken Merkel’s hand in negotiations with SPD, which favours a more open migration policy.

Should these impediments cause talks to fail, Merkel’s conservative bloc could attempt to form a minority government that is tolerated by the other parties. In this scenario, SPD would aim to maintain its independence from Merkel’s bloc while supporting the government on important policy matters, such as defence, security, and European policy.

Germany could face another national election. Although this is the least likely outcome, it could transpire if all negotiations fail.