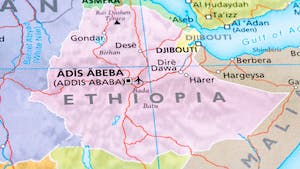 What’s behind the uptick in ethnic tensions in Ethiopia

Since his ascent to power in 2018, Abiy has attempted to bolster political stability and reduce ethnic tensions by building alliances between mainstream political parties and ethno-nationalist factions that remain outside of, and often opposed to, the ruling EPRDF coalition. Abiy’s democratisation efforts have allowed previously marginalised parties and former rebel groups to participate in the political process. These efforts have also emboldened ethno-nationalists to pursue territorial adjustments in their favour. In June, Amhara nationalists led by Amhara security chief Asaminew Tsige killed the head of the country’s armed forces, Amhara’s state president and tens of others during a failed coup attempt.

Asaminew was jailed in 2009 over a previous coup plot but was appointed to the Amhara Democratic Party (ADP) central committee in October 2018. His reintegration led to an uptick in ethnic tensions in Amhara, and attempts to reintegrate other more hard-line ethno-nationalist movements, such as the Oromo Liberation Front, into the mainstream political process are likely to provoke similar unrest, particularly among members of the Amhara and Tigrayan ethnic groups.

Abiy is also facing opposition from within his own Oromo ethnic group. The violence across Oromia in October was triggered by a dispute between Oromo activist Jawar Mohammed and Abiy, after the prime minister implied that Jawar was responsible for stirring up anti-government dissent. Indeed, Abiy’s attempts to transform the ruling EPRDF coalition into a un ified political party have been met with resistance by Oromo nationalists, who claim he is ignoring past injustices purportedly suffered by Oromos at the hands of rival ethnic groups.

The prime minister’s reforms have also contributed to elevated ethnic tensions in the south of the country, where groups have increased their demands for the establishment of autonomous regions. In July, a low-level decades-long campaign by the Sidama ethnic group for their own regional state in the Southern Nations, Nationalities and Peoples’ Region (SNNPR) escalated when activists and opposition politicians threatened an imminent declaration of autonomy. The government responded by deploying security forces to thwart the attempt, triggering clashes that left at least 35 people dead.

May 2020 elections: The latest challenge to Abiy’s administration is likely to lead to a more restrictive approach to the management of ethnic tensions in the country, with fringe ethno-nationalist factions likely to be more closely monitored by security forces and the intelligence services. The political environment could also deteriorate ahead of the elections scheduled for May 2020, which could see Abiy’s administration attempt to clampdown on rival Oromo factions perceived as a threat to the dominance of his own Oromo Democratic Party.

The prospect of election-related violence remains high, and any delay to the vote or a disputed outcome could threaten to rupture the ruling EPRDF coali tion along ethnic lines. Elections in the country traditionally see parties embrace ethno-nationalism and take belligerent political positions to garner support from their ethnic power bases. Such standpoints are likely to trigger violent clashes between rival ethnic groups. Additionally, Jawar has not ruled out contesting the elections in May. His participation would increase the likelihood of clashes between rival Oromo factions.

SNNPR: A referendum is due to be held on 20 November in Ethiopia to determine the Sidama’s quest for statehood. The formation of an autonomous Sidama region would pave the way for ethnic groups in the south to advance similar claims to statehood, a factor that if not checked by the government, threatens to unravel Ethiopia’s federal system in the long term.