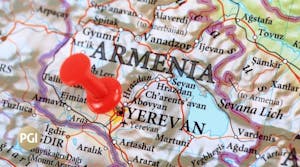 Prime Minister Nikol Pashinyan has faced widespread condemnation from anti-government protesters and opposition leaders over a November 2020 ceasefire agreement with Azerbaijan, that ceded territorial control over the disputed Nagorno-Karabakh (NK) enclave. Domestic pressure to step down peaked on 25 February, when 40 high-ranking members of the army called on Pashinyan and his cabinet to resign over his earlier dismissal of the deputy chief of the armed forces. This prompted Pashinyan to accuse the m ilitary of an attempted coup.

Pashinyan subsequently issued a decree to dismiss military Chief Onik Gasparyan, which President Armen Sargsyan twice refused to sign. Opposition parties then unsuccessfully attempted to dismiss Pashinyan as he maintains majority support in parliament. Since the alleged attempted coup, Pashinyan has offered to hold early elections but opposition parties have instead called for a transitional government.

The most likely outcome to the ongoing crisis is a political settlement between the opposing parties, though this is unlikely to take place in the coming week. Current government and opposition negotiations will likely take several weeks before reaching a solution.

It is unlikely that the army will take further action and instigate a coup against Pashinyan. Firstly, there is no precedent of the army intervening in domestic politics in Armenia. Secondly, conflict-fatigue from the recent NK conflict that killed 4,000 Armenian soldiers further diminishes the likelihood of a coup.

In the short-term, it is unclear whether Pashinyan will remain prime minister. The loss of NK and subsequent military and popular support has reduced the likelihood of Pashinyan staying in office beyond the 2023 parliamentary elections.

Opposition parties may want Pashinyan to remain prime minister in the coming months to take the blame for ongoing challenges in NK. Armenia’s leader must begin demarcating the new border and developing transport links between Armenia and Azerbaijan and their respective enclaves, as agreed in the ceasefire deal. Such action that cements the terms of the ceasefire agreement and accepts the loss of NK will likely provoke strong criticism from the public.

However, if the opposition delays negotiations long enough to garner more public support, produce a new political plan, and avoid ongoing decision-making processes in NK, then it may accept early elections in the medium term. This is particularly as early elections are the only concession Pashinyan has so far offered, despite widespread protests and pressure to resign since November 2020.

Pashinyan is unlikely to accept the opposition’s demand for an interim government in the near term. Pashinyan has so far rejected calls for his resignation from opposition parties, the president, several branches of the church, and the military. None of these entities have the constitutional power to dismiss the prime minister. Pashinyan is therefore likely to continue refusing to resign, particularly while opin ion polls show he still has approximately 33 percent of popular support. The second most popular party, the Prosperous Armenia Party, holds just 4.4 percent of support.

Nevertheless, the likelihood of a provisional government would increase if the opposition permit Pashinyan to remain in office during the transitional period, and if he were assured immunity from prosecution. As negotiations continue in the coming weeks, opposing sides will likely discuss these potential provisions.

Pashinyan is unlikely to use force to maintain power, and the military is unlikely to attempt a violent coup. During protests in December 2020, Pashinyan reportedly called on the army to prepare its troops to enter Yerevan, which the then-military chief refused. Given the signatories of the 25 February letter from the armed forces included 40 of the most senior ranking officers, it is highly unlikely that the military would help Pashinyan to maintain his position through force.

Equally, it is also unlikely that the military will carry out a coup. This is the first instance of the Armenian military intervening in domestic political processes, and it has not taken any further action since the February letter. The letter itself urged against the use of force. Furthermore, a military coup would lack popular support so soon after the death of 4,006 Armenian soldiers in the recent NK conflict. A February poll showed that only 31 percent of Armenians support trying to win back territories lost in the November 2020 ceasefire, while a further 28 percent are willing to accept the terms of the deal.

Current opposition protests are unlikely to lead to a popular revolution due to low turnout. An opposition rally scheduled well in advance on 20 February had a maximum estimated turnout of 20,000 people. Anti-Pashinyan protests on 25 February drew similar crowd sizes as the counter-protests in support of him. Pashinyan led the 2018 revolution through protests, but these attracted hundreds of thousands of people. Without consistently high-turnout, opposition demonstrations are unlikely to trigger political change in the short term.