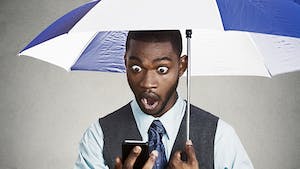 In what is being described as ‘one of the worst CPU bugs ever’, serious security flaws have been found in processors designed by Intel, AMD and ARM that could enable hackers to steal sensitive data.

Academics working alongside Google’s Project Zero have reported that the two flaws, named Meltdown and Spectre, affect a range of modern devices including smartphones, tablets and PCs from all vendors and running almost any operating system.

The Meltdown flaw primarily affects Intel processors manufactured since 1995 and could allow malicious actors to access privileged memory on a device. A fix is available, but it requires a change to the way the operating system handles memory and some pessimistic headlines have estimated this could detrimentally affect the speed of some machines by up to 30%.

Although it is harder for attackers to exploit, the underlying Spectre vulnerability is more serious as it affects most modern processors made by Intel, AMD and ARM. Again, this potentially allows hackers to access sensitive information, but most worrying is that the issue is a fundamental processor design flaw. Some experts, including the US-CERT, have suggested the only real solution for these issues is for chips to be totally replaced, but this could take years to resolve.

It is important to realise that these issues are not solely a problem with Intel, as was initially being reported in some articles. All major vendors such as Microsoft, Apple and Google have released patches or mitigating advice during this rapidly evolving incident and, although there is a compromise in performance when issuing a fix, we encourage users to install patches at their earliest opportunity.

For assistance in putting policies and procedures in place around your technology, please contact us: sales@pgitl.com or +44 (0) 845 600 4403