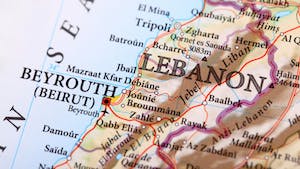 On 17 October, hundreds of people protested the government’s austerity measures, financial mismanagement and corruption. The government’s announcement of taxes on voice-over-internet applications was the catalyst to the country’s largest demonstrations since 2005. The demonstrations grew rapidly with reports indicating that around 1.7 mn people protested nationwide on 20 October, nearly half the estimated population.

The recent protests mark a significant shift from the usual small-scale protests as well as the demonstrations in 2015 over government mismanagement of waste collection. This is due to the spontaneity and scale of the protests, their geographic diversity and the variety of protesters across social, religious and political lines. The pace and intensity of the protests is also evidence of the depth of discontent with the political establishment.

Protesters demand structural changes after years of stagnant growth, lack of economic opportunity and growing wealth inequality in Lebanon. Demonstrators have been clear in their demand for the resignation of the entire government followed by a transitional government run by technocrats. Protesters have also demanded the return of stolen public finances from corrupt officials. A prominent slogan featured across the demonstrations is “all of them means all of them” – referring to the entire political class. This is significant as it highlights the cross-confessional nature of the protests.

Prime Minister Saad Hariri outlined a set of economic reforms to appease protesters which included: the partial privatisation of Lebanon’s telecommunications sector, a 50 percent cut to current and former MP’s salaries, and a tax on bank profits. However, protesters have rejected these reforms as they no longer accept the legitimacy of the government. Following Hariri’s statement, protesters continued blocking roads and striking. Protesters are unlikely to be satisfied until the entire cabinet resigns, fuelling further unrest and potential confrontations with se curity forces in the coming days.

Small scale counter-protests have been organised, namely by supporters of the Amal movement and Hezbollah. Supporters of President Michel Aoun’s Future Party Movement have also led demonstrations. Counter-protests caused confrontations and sporadic violence between anti and pro-government demonstrators, though many skirmishes have been broken up by the army. Despite this, demonstrators defy intimidation from pro-government groups.

Most likely: President Aoun oversees a small reshuffle, potentially holds early parliamentary elections and passes some economic reforms. However, this will fail to satisfy protesters who will continue with strikes and roadblocks. The government has said it will not tolerate economic paralysis from roadblocks and is therefore likely to use a mix of concessions and moderate force to end the protests. Government intervention, coupled with the economic impact from closed roads, as well as closed banks, schools and businesses, will likely slow the momentum and eventually see the movement dissipate.

Second most likely: Protesters maintain their momentum and do not give in to economic pressure of demonstrations. This will likely result in a forceful crackdown by security services. It may also lead to further violent confrontations between demonstrators and armed supporters of Amal, Hezbollah and Future Party Movement, who each seek to discredit the demonstrations and maintain their influence under the status-quo.

Least likely: Mass protests and nationwide disruption continue after violent government suppression and prolonged economic disruption. Demonstrators maintain roadblocks on main highways and continue daily strikes across all sectors. The pressure is accompanied by frequent eruptions of violence and leads to the full resignation of the government and new parliamentary elections.