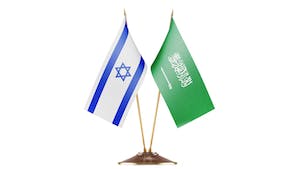 On 22 March, an Air India passenger aircraft became the first Israel-bound commercial flight to cross Saudi airspace. The development marked the end of a decades-long Saudi ban on Israel-bound flights transiting its territory. It was initially denied by both Air India and the Saudi Aviation Authority, reflecting Riyadh’s reticence to reveal its long-rumoured ties with Israel. Less publicised was the fact that the Air India aircraft also flew over Omani airspace, which was not mentioned by Oman, Israel or the airline.

Relations between Israel and Gulf Cooperation Council members, with the exception of Kuwait, have improved in recent years as their interests converge over perceived threats from Iran’s regional influence and political Islam. Gulf states have never had diplomatic relations with Israel and the Arab League has maintained an official boycott of Israel since the latter’s establishment in 1948. Several key developments are evident indicators of improving relations:

Riyadh’s decision to allow Israel-bound aircraft to fly over its territory could pave the way for additional cooperation with Israel. Israeli national carrier El Al has appealed to the International Civil Aviation Organisation in a bid to reroute its flights to and from India through Saudi Arabia, saying that it would be discriminatory for Riyadh to allow only Air India to take the much-shorter path through its airspace. Granting overflight approval to an Israeli airline would constitute a substantial diplomatic shift for Riyadh.

This could pave the way for increased overt cooperation such as the opening of additional small Israeli diplomatic missions – labelled as trade offices or accredited to international organisations – in Gulf states.

There have also been rumours of more dramatic steps. In late 2017, the Bahraini king reportedly called for an end of the Arab boycott of Israel, signalling some high-level support for a possible normalisation of diplomatic ties.

Despite some improvements in Israel-Gulf relations, a breakthrough remains unlikely in the short to medium term. While Israeli officials have proudly spoken of the shift in relations with “moderate Arab states”, Gulf countries have been keen to keep their increased dealings with Israel out of public view. For example, Saudi officials have yet to comment on the country’s approval to open its airspace to the Air India flight, and in the past Gulf governments have vehemently denied any budding alliance with Israel.

The reluctance of Saudi Arabia and other Gulf countries to publicise any ties with Israel underscores the continued sensitivity of the topic. Public opinion in the Arab world remains strongly opposed to Israel, with a 2016 poll indicating that 100 percent of Saudis and Emiratis hold an unfavourable view of the country. This negativity was all too evident in the intense backlash faced by the Bahraini interfaith delegation that visited Israel, forcing the group to clarify that it did not represent any official institution. The Saudis, who are vying for the leadership of the Muslim world with Iran and Turkey, are not likely to risk alienating Arab public opinion for the limited benefits brought by an overt relationship with Israel.

As acknowledged in December 2017 by Israeli Prime Minister Benjamin Netanyahu, only significant progress on the Palestinian issue would allow Gulf countries to justify an open embrace of Israel. Such a scenario, however, appears unlikely in the current circumstances. Indeed, the Palestinian Authority (PA) has said it would no longer accept the US as a mediator in the peace process, saying that Washington could not serve as an honest broker after it recognised the contested city of Jerusalem as the capital of Israel in December. Media reports suggest that the announcement of a long-awaited US peace proposal has been delayed indefinitely due to the PA’s opposition.

The status quo is therefore likely to continue, with Gulf states benefitting from Israeli security and technology cooperation while Israel showcases its diplomatic achievements and at least partially fulfils its long-standing aspiration of ending its regional isolation. Although a full normalisation of ties appears unlikely in the near future, there is room for limited additional cooperation, which will probably be met with continued silence from Gulf officials.