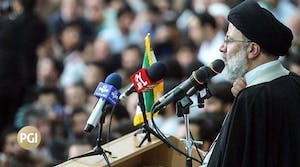 Iran is set to hold presidential elections at a sensitive period. Former US president Donald Trump’s decision to withdraw from the 2014 nuclear deal and reimpose sanctions on Iran has contributed to a severe economic crisis with inflation reaching 50 percent. This has been compounded by one of the region’s worst COVID-19 outbreaks. Further increasing tensions, authorities have continued to crackdown on dissent with the jailing of activists and the violent repression of mass protests in late 2019 – 2020.

Tensions over the election increased after the ultraconservative Guardian Council, a powerful body in charge of vetting candidates, disqualified most of the leading moderate and reformist presidential contenders. The move appeared designed to benefit Ebrahim Raisi, the head of the judiciary and the preferred candidate of Iran’s supreme leader, Ayatollah Ali Khamenei.

With Khamenei’s support, Raisi appears highly likely to capture the presidency, further boosting Iran’s Principlists, a political bloc that consists of conservatives and hardliners. In February 2020, Principlists secured a majority in Iran’s 2020 parliamentary elections amid low turnout and the mass disqualification of reformist and moderate candidates, including 80 sitting MPs. Similarly, low turnout is expected to help Principlists capture the presidency amid calls for moderate voters to boycott the election after their candidates were disqualified. Although, if turnout is very low, it could undermine Raisi’s legitimacy and contribute to disillusion.

Disputed presidential elections triggered some of Iran’s largest protests in 2009 and the country has seen continued regular outbreaks of mass unrest in the years since. However, even with the weak economy, poor governance, and uncompetitive elections, the recent lack of interest in voting suggests Iranians may be too disillusioned to turnout in large numbers to protest. The continued repression of dissent and the inability of large-scale protests to effect political change are likely to serve as further disincentives for election-related unrest. However, the population will remain sensitive to economic changes, as demonstrated by protests after fuel prices were increased in November 2019.

Looking ahead to a Raisi presidency

Domestically, a Raisi administration is unlikely to pursue the significant reforms needed to increase competitiveness and help Iran attract much needed outside investment. Instead, he is expected to maintain the protectionist and state-led development model that favours well-connected elites who dominate the economy, including those with ties to the powerful Islamic Revolutionary Guard Corps and clerical establishment.

Despite Raisi’s hardliner status, it appears increasingly likely Iran will return to compliance with the nuclear deal even if he wins the presidency. The US, EU and Iran have held several rounds of talks to salvage the agreement in recent months, and Iran’s supreme leader, the country’s ultimate authority, has sent signals that Tehran is willing to comply with the pact if the US lifts sanctions imposed since 2018. Doing so could allow Principlists to take credit for an improving economy while placating moderates who support engagement with the West.

Conservative control over all of Iran’s key institutions could also free Principlists to lower tensions with Iran’s rivals without substantively changing the country’s foreign policy, including support for proxies in Iraq, Syria, and Yemen. Raisi is unlikely to prioritise diplomacy in the same way outgoing moderate President Hassan Rouhani has, but, with a hardliner in charge, Iranian Principlists can be more confident that their political, economic, and social interests will be protected in any engagement with the US or Saudi Arabia, both of whom have signalled an openness to de-escalation.