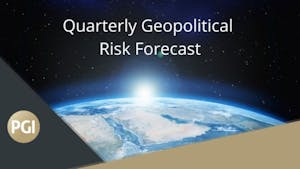 In this edition of the Forecast, the PGI Geopolitical Analysis team have identified civil unrest as posing a significant threat in a number of regions, particularly in relation to election activity, economic conditions and the impact of coronavirus (COVID-19) restrictions. Political violence and international relations also feature across the globe.

Nationwide anti-government protests have continued in Belarus following a disputed election and subsequent crackdown by security forces. In Ethiopia, there has been a resurgence in violent protests in Oromia and other regions. Further protests are possible in the coming quarter amid heightened ethnic tensions across many parts of the country.

In Thailand, student-led protests have been calling for reform of the country’s political system and monarchy since July amid increasing anti-government sentiment.

Argentina, Ecuador and Paraguay have seen frequent demonstrations over restrictive measures and economic hardship amid the pandemic.

A reduction in restrictive measures in some countries may see dormant protest movements restart in the next quarter. In Colombia, opposition activists affiliated with the National Strike Committee (CPN) restarted nationwide protests that first began in November 2019 but were suspended due to the COVID-19 pandemic.

PGI has placed Mozambique on the watchlist amid an increase in militant attacks in Cabo Delgado, and growing indications that Islamic State-affiliated militants are capable of capturing and holding territory in the province.

In Libya, political violence has decreased amid concurrent ceasefires announced by rival governments in Tripoli and Benghazi. Despite occasional violations, there is a prospect that pressure from international actors might lead to negotiations.

Israel is on the watchlist ahead of a potential improvement in regional relations following US-backed normalisation agreements with the United Arab Emirates (UAE) and Bahrain in September.

PGI has also placed the US on the watchlist for international relations ahead of presidential elections in November. A win for Democratic candidate Joseph Biden at the elections could see a change in foreign policy direction, though relations with China are not expected to significantly improve.

Tensions between China and foreign governments are likely to continue, notably with Australia and India. Canberra introduced a bill that enables the federal government to veto agreements between local governments and foreign states, in a move seen as an attempt to prevent China from interfering in Australia’s internal affairs. Meanwhile, tensions between China and India continued to escalate over their disputed Himalayan border.

PGI’s clients need to know what’s happening around the globe and the implications for the future. The Geopolitical Risk Forecast provides this information based on our ongoing monitoring and analysis of global events and geopolitical activity, and our experience working with organisations that have global footprints and need to ensure the safety of their people and the continuity of projects and commercial relationships.