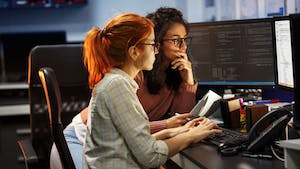 It’s important to celebrate women’s contributions to technology—both historically and into the future.

Recently, we shared the stories of some of our Women in Technology heroes. Their contributions have impacted many of the technologies widely used today. Take a look:

Hedy Lamarr was involved in the development of the technology that would serve as the foundation of modern spread-spectrum communication technology, which is used in GPS, Wi-Fi and Bluetooth.

Joan Clarke, is known for being the only female cryptanalyst who worked with Alan Turing, but her wider contributions to the technology community are not always well known.

Katherine Johnson’s story was recently depicted in the film Hidden Figures; she is an African American mathematician whose calculations were integral to the success of the first NASA manned spaceflights.

Technological advances continue to be made every day and we know that many amazing women are involved – they stand on the shoulders of these awe-inspiring women and many more.

Become a woman in technology – PGI’s Women in Cyber Initiative

We want to help further foster the development of women in the tech space, especially in cyber security. That’s why we have developed the Women in Cyber Initiative; our recruitment and career conversion programme for women wanting to begin a career in cyber security.

Like the wider technology sector, only 20% of the cyber security workforce is made up of women and we want to change that. Particularly, because we know that 35% of organisations are struggling to fill open cyber related roles, so it only makes sense for suitably skilled women to take those positions on, increasing diversity in the industry as well as cyber defences.

PGI welcomes candidates—who want to retrain, return to work, or simply want to get started in the cyber security industry—to apply for the Women in Cyber Initiative.

Hire a woman in technology

PGI also welcomes organisations to invest in candidates to fill vacant or much needed cyber security positions. To find out more about employing talent from our Women in Cyber Initiative, contact us via sales@pgitl.com