Will Armenia's June 2021 snap election have lasting impact on domestic and foreign policies? 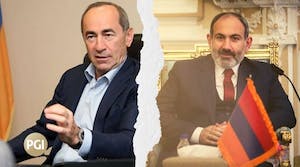 Will Armenia’s June 2021 snap election have lasting impact on domestic and foreign policies?

Acting Prime Minister Nikol Pashinyan has scheduled snap elections on 20 June. Opposition activists and politicians have called for Pashinyan to resign since he signed a ceasefire agreement with Azerbaijan in November 2020 after humiliating military losses. Despite countrywide protests, an alleged attempted coup in February 2021, and mass resignations in the foreign ministry, Pashinyan remains a frontrunner in the election. Despite this, recent polls show that Pashinyan’s lead is slim. He is representing the Civil Contract Party, while former president Robert Kocharyan is leading the main opposition party Armenia Alliance as the other frontrunner. Both their electoral campaigns have heavily focused on national security issues.

The outcome of the election will have a major impact on Yerevan’s approach to the November 2020 ceasefire agreement with Azerbaijan and its national security and foreign policies more broadly. Several terms of the ceasefire agreement have not yet been met, including demarcating the Armenia-Azerbaijan border. Both Yerevan and Baku have reported cross-border violence in recent weeks, highlighting the potential for further clashes in the coming weeks.

The contest between Pashinyan and the former president has implications for the future of Armenian democracy. Former president Kocharyan has played up his past as a seasoned statesman and wartime leader, having been directly involved in Nagorno-Karabakh (NK) gaining autonomy in 1994 and later becoming the enclave’s first president. He has promoted a hardline approach to Armenian sovereignty, appealing to voters focused on national security.

However, pro-government activists have voiced concerns about Kocharyan’s commitment to democracy and respect for civil liberties. An inquiry ordered by Pashinyan in 2018 accused Kocharyan of instructing police to fire on protesters in 2008. Under his leadership, it is possible that Kocharyan will use state apparatus such as strengthening of police powers and unfavourable regulation to silence opposition and push through aggressive national security policies.

By contrast, supporters of Pashinyan see him as the candidate most likely to protect Armenian democracy. NGO Freedom House credits Pashinyan with holding Armenia’s first free and fair elections in 2018.

Nevertheless, Armenian military losses in and around NK and Pashinyan’s subsequent conciliatory approach to relations with Azerbaijan have triggered mass protests and other unrest. Protests in Yerevan demanding his resignation peaked in March, attracting tens of thousands of people in the capital. This public pressure likely contributed to Pashinyan’s announcement of snap elections in late March. While counter protests drew similar turnout as opposition protests, showing he maintains a strong support base, his re-election is still likely to cause further mass unrest.

The candidate elected after 20 June will greatly shape Yerevan’s relationship with Azerbaijan. If Pashinyan is re-elected, Armenia is likely to continue its conciliatory approach in its relations with Azerbaijan to prevent further territorial losses. If Kocharyan is elected, the country is likely to take an assertive approach to its foreign policy, probably provoking further conflict with its neighbour.

Under Pashinyan’s leadership, his government negotiated in mid-June the release of 15 Armenian prisoners of war in exchange for providing Baku with a map of landmines in the NK region. In the medium term, negotiations with Baku are likely to continue and focus on demarcating their shared border and eventually developing the proposed transport corridors in the disputed region.

Pashinyan’s pacifying approach has, however, caused domestic unrest in the form of mass protests as well as mass resignations in the foreign ministry in the last few months. A continuation of his appeasing strategy is therefore likely to trigger further civil unrest, though it may reduce the likelihood of conflict with Azerbaijan. However, political instability in Armenia will still leave it vulnerable to further military engagement with Azerbaijan in the medium term. Low-fatality cross-border shootings could therefore still escalate into outright conflict even under Pashinyan’s conciliatory strategy.

By contrast, Kocharyan is likely to aggressively reject further encroachment of Armenian territory by Azerbaijan. As such, under his leadership, Armenia is likely to respond violently to border violations or initiate cross-border skirmishes. Kocharyan has publicly rejected the establishment of cross-territory transport corridors as per the ceasefire agreement and has pledged to retake some of the recently lost territories. If elected, there is a moderate likelihood that he will formally reject the terms of the ceasefire entirely. In this highly aggressive scenario, PGI believes the resumption of conflict is likely.